Lisa Camillo was one of the breakout stars of this year’s Lavazza Italian Film Festival. The Sydney-based Director, Write and Producer wowed audiences and critics alike with her gripping documentary, Balentes. The documentary follows Camillo returning to her mother’s native Sardinia, where she uncovers the environmental and economic degradation of the island at the hands of the NATO Military, corporate interests and the Governments exploitation. I chatted with Lisa about her Italian heritage, her love for Sardinian cuisine and the making of Balentes.

First of all congratulations on Balentes! You initially had planned to make a very different documentary about Sardinia?

Absolutely, it was going to be more about the fun of the 60’s and 70’s on the Costa Smeralda and instead it turned out to be quite dark and about this whole loss of island paradise.

Do you see Sardinia in a different light now? Is your original pitch still a story you want to tell?

I will still do that. That is my next project, but (working on Balentes) has changed the way I see Sardinia, a historical Sardinia and the Sardinian people and that’s why I decided to do something and to really get this story off the island and to compensate the people that perished or you know are suffering and clean out those areas.

You previously described Sardinia as a “paradise” and a “fairy tale place”, so has your perspective of Sardinia completely changed from what you have now discovered? Or have you just found a darker side?

I think I feel tricked. I feel that, you know this paradise island that I remembered was hiding a lot of secrets and it has cast a bit of a shadow onto that childhood that I remember, that was so perfect and so beautiful, because I was living in a place of incredible beauty that was pristine as well. I always felt safe and now I’ve realised we aren’t always safe. In 1994 one of the NATO areas in Costa Smeralda which is now closed, and I remember some submarines passing through it and I thought it was normal back then, but one day there was a submarine accident and the submarine got stuck in some rocks and it could have exploded and caused a nuclear explosion. But I didn’t know that and nobody knew that back then. And a lot of people still don’t know that. We nearly could have all died because of this.

What has been the reaction from most Sardinians who have seen your film? Were they aware?

They weren’t really aware. They know that there are some NATO areas but they had no idea how bad things actually are. We had a private screening with some friends and people that were involved in the film and that was in June and people were completely shocked and very supportive.

So tell me about your childhood and growing up between Sardinia and Rome?  and what are some of your fondest memories of Sardinia?

I was studying and living in Rome and spent my summers in Sardinia. In my film, we have. scene where I went to my Mum’s village. They have this town party every year and so they go outside the town into the country and they make a huge pot of soup together and it’s kind of like a mutton soup with a cous cous looking pasta and it’s just amazing. It’s a Sardinian minestra?

What’s your favourite dish of all time?

Culurgiones, basically they’re like a big ravioli and it’s quite chubby and the filling has a like a potato paste with pecorino cheese and some nutmeg. I don’t make them but my family do and now that I’m back home I want to try and make them.

Being a producer, write and director must mean you don’t have a lot of free time. Do you have a go to dish when you are on the go?

Well in Sardinia, I do a Pane Carasua which is like a crispy flatbread and what you do is cut some thick slices and add some pecorino cheese. It’s so simple but it’s delicious.

What do you miss the most about Italy when you’re in Australia?

Oh the food and the culture around food. We go for a big lunch and dinner and we spend hours talking and have that real and deep connection.

What are your three must have ingredients?

Fresh tomatoes, basil and olive oil – you can’t go wrong. We can make so many dishes like pasta and bruschetta just with those three ingredients.

If you could dine with anyone living or dead, who would it be and what would you make for them?

I would choose my Great Grandfather who migrated to Australia. His name was Celeste, which is my second name and basically he came on a big ship to escape the Second World War and he was a guitarist and on the boat he was singing to people who were sick and afraid and he used to say to them in Italian, “Mai Paura”, which means never fear and then they called him “Mai Paura” which became his nickname. Sadly I didn’t meet him, but he was a great man. He was very courageous and very Balentes. And I’d learn how to make Cuirigione for him, for his honour.

Were there any other movies from this year’s festival that resonated with you?

I loved Happy As Lazzaro and Dogman.

What are you working on next?

My next project is focusing on the fun part of Sardinia, Costa Smeralda and the history and all the famous characters back then. 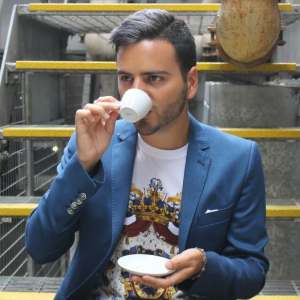